What glaucoma drops and eyelash cosmetics have in common.

You’re already familiar with the multiple side effects of prostaglandin analogues (PGAs) on glaucoma patients, who use this first-line therapy to lower IOP. Perhaps the most noticeable side effect in patients who take medications with PGAs is longer, thicker eyelashes. But you should also look for these same side effects in dry eye patients who might be inadvertently using an over-the-counter (OTC) cosmetic adulterated with PGAs — and making their symptoms worse.

Any ophthalmologist who prescribes PGA glaucoma medications is familiar with PGA’s potential effects on the periocular structures, eyelids, cornea, iris and retina. Myriad side effects listed on package inserts include hyperpigmentation of the eyelids and iris, blepharitis, dry eye, keratitis, hyperemia, iritis and even cystoid macular edema. Another side effect, prostaglandin-associated periorbitopathy (PAP), was described after the launch of Xalatan (latanoprost, Pfizer) in 2003. The PAP side effects are now included in package inserts. You will observe the same PAP-like effects from OTC ELGS containing PGAs.

CLINICIANS ON THE ALERT

Fortunately, awareness is growing and ophthalmologists are increasingly asking dry eye patients about their makeup and cosmetic usage. Physicians should also ask men about skin care and cosmetic use, because it’s a growing trend.3,4 It can also be difficult to see signs of hyperpigmentation and abnormal eyelashes if a patient wears eye cosmetics to an appointment, so look for other telltale signs such as abnormally long eyelashes, orbital fat atrophy, deep orbital sulci and ptosis (Figure 1). 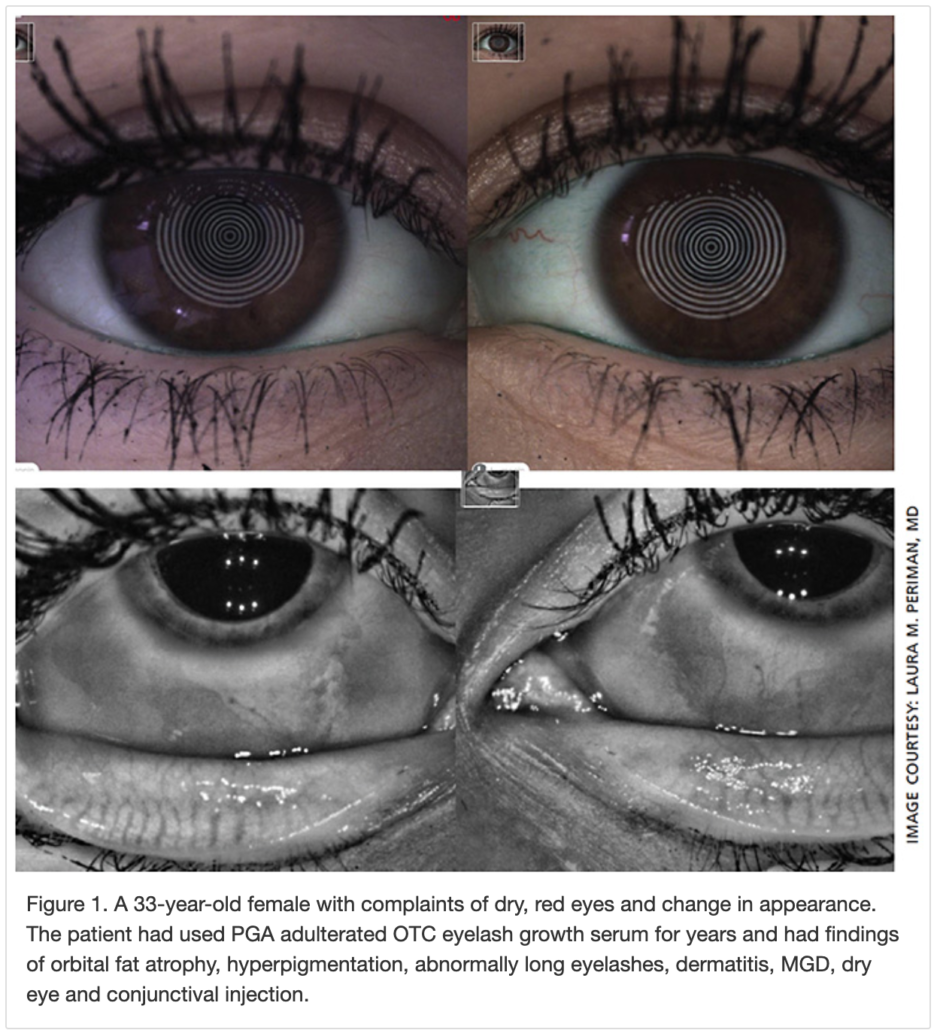 Given the side effects of OTC ELGS, it’s not surprising that a survey presented at ARVO 2020 revealed that 43% of the 154 respondents who reported using these products discontinued using them. Of these, 67% said they stopped using them due to side effects such as eyelash loss, eyelid pigment change, burning, stinging or itching.5 Clinicians should inquire about ELGS use and recommend discontinuing use.
THE IMPORTANCE OF CHEMICAL STRUCTURE

As previously stated, one-third of OTC ELGS are adulterated with PGAs such as ICP.1 Biochemically, PGAs in OTC cosmetics can be just as potent as the strongest PGA in your glaucoma medication arsenal. A look at their chemical structures reveals why this is true (Table). Ungrin and colleagues6 showed that certain modifications to the backbone of the PGE2 prostaglandin molecule resulted in differences in binding affinity and activation of PGE2 receptors. Changes most related to high binding and potency included esterification of the C1 group, hydroxylation at the 11 and 15 position and tail modifications such as phenylation, as illustrated in the Table. These various chemical group alterations impact drug potency and thereby influence drug dosing. 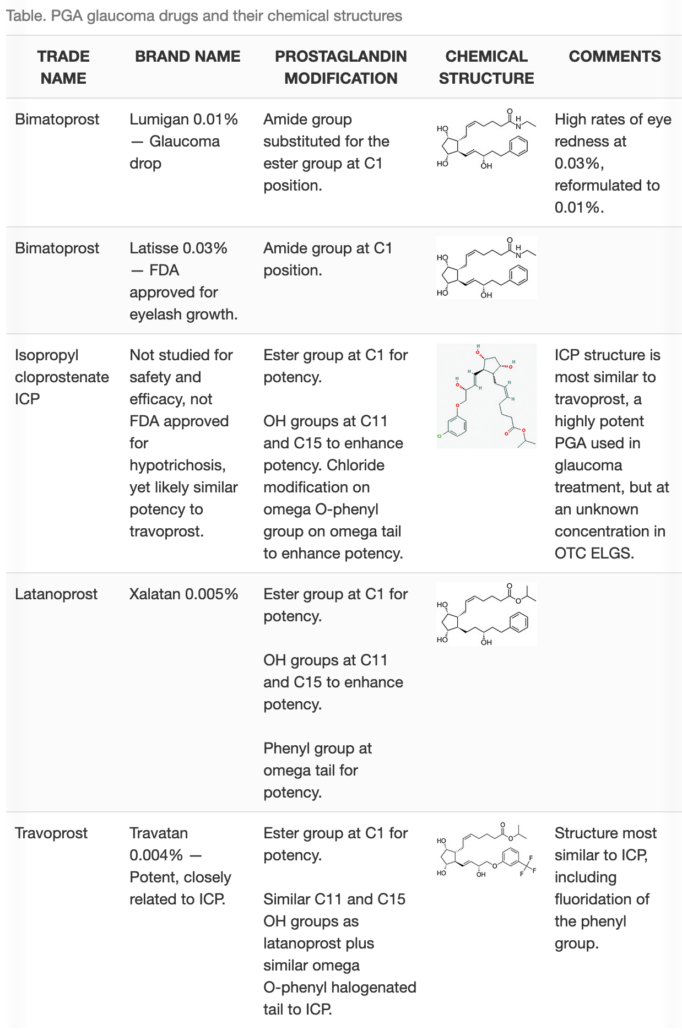 Multiple patents for different PGAs are found online. Not all PGAs make it through early clinical development; some are abandoned for drug development due to inadequate IOP reduction and/or side effects. However, just because a molecule failed to be selected for development as an FDA-approved drug does not mean it’s without the multiple, common, recognizable and predictable side effects characteristic of the PGE2 class. Class action lawsuits have been filed in the United States for failure to disclose the risks associated with PGAs, and drug safety watchdogs have called out the issue of using PGAs in cosmetics for failing to disclose its risks.7

Latisse (bimatoprost 0.03%, AbbVie), a PGA, is the only FDA-approved medication indicated for “hypotrichosis of the eyelashes by increasing their growth including length, thickness and darkness.”8 Physician confidence is bolstered knowing that side effect and safety information is included with each package and is helpful when counseling patients.

Unfortunately, however, OTC ELGS aren’t properly tested for safety, and the risks that characterize the PGA class and the drug concentrations are not disclosed.9 Despite the predictable and expected PGA side effects, cosmetics companies carefully wordsmith their claims and marketing to hide under the “cosmetics” category. They play in a grey area by focusing on the appearance of longer, thicker lashes to carefully avoid direct claims of giving longer, thicker lashes. The product warnings are insufficient and would never pass muster as a prescription, yet the active ingredient ICP is likely just as potent as travoprost. Furthermore, many patients assume that OTC cosmetics are safe. They are understandably shocked and angry when they discover that the OTC products they purchased for eyelash growth are contributing to their ocular surface disease (OSD).

BEWARE OF OTHER DANGERS

We need to be wary of other deleterious eyelash practices. Patients’ failure to remove their makeup at night can also contribute to their dry eye disease.

Research has shown that patients who did not remove their makeup at night had higher dry eye symptoms and statistically significantly higher Standard Patient Evaluation of Eye Dryness (SPEED) scores than patients who removed their makeup.10 Research in this area has continued, and reveals that more than half of patients use two or three different makeup removers each night.11 This has the potential to compound the chemical insults to the ocular surface of the dry eye patient.

We’ve all seen patients who removed their makeup yet still have significant cosmetics debris on their lids and tear film (Figure 2). The chemicals in makeup removers may not be ocular surface friendly, thus further compounding the issue. For example, benzalkonium chloride (BAK) is the leading liquid makeup remover. Given the FDA cosmetics-labeling requirements of listing ingredients in descending order of amounts, the position on the list of BAK means it is possible that the final BAK concentration in some liquid eye-makeup removers is far higher than anything in ophthalmic prescription drops. 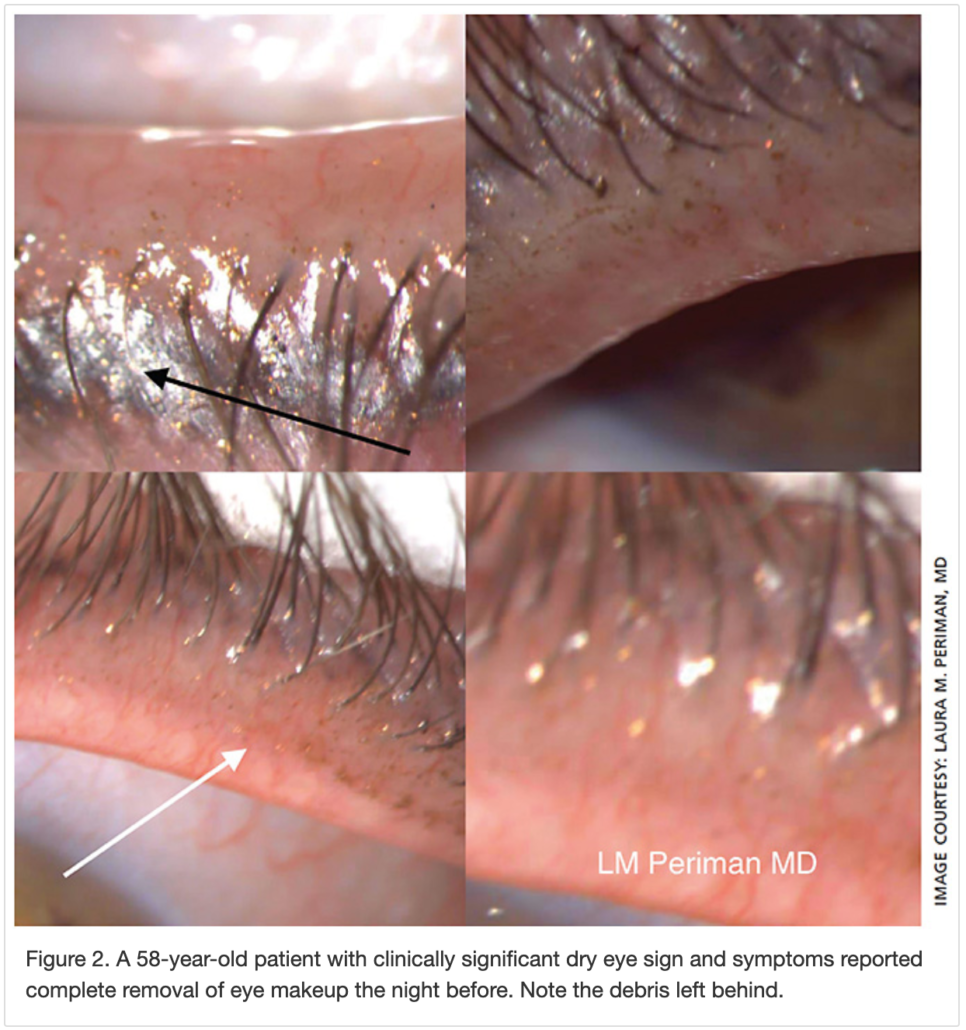 Clinicians should be aware that the deleterious effect of BAK on corneal, conjunctival and goblet cells makes these products a potential sneaky exacerbator of OSD.

Unfortunately, we can’t rely on OTC cosmetics labels such as “ophthalmologist tested” for ocular safety, either. Data fraud has occurred at facilities that conduct the studies for “ophthalmologist tested.”12 Additionally, cosmetics companies may elect to run their products through the EpiOcular human keratinocyte cell culture assay as an alternative to animal testing. This assay involves cell culture exposures to human keratinocytes and scoring cell survivability with exposure to the cosmetic. A score of 60% cell survival and above is considered “non-irritating.”13 In other words, up to 40% of cells can die and a product can still be labeled as “non-irritating.”

I am continually learning about the interplay of cosmetics and dry eye. As ophthalmologists dedicated to our patients, it is important to familiarize ourselves with the impacts of cosmetics on OSD and discuss them with our dry eye patients. OM

Laura M. Periman, MD, is an ocular surface disease specialist and founder of Periman Eye Institute in Seattle, Wash. Additional educational content can be found on her website, www.dryeyemaster.com . Dr. Periman has written and lectured extensively on the topic of cosmetics dangers to eye health. Contact her.